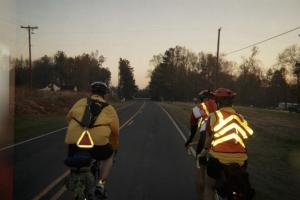 The 2004 High Point Flèche was held on Friday April 9 - Saturday April 10. After spending the night at the home of our team's gracious host, Joe Grove, team member Pete Dusel, visiting from Rochester/Ontario NY, together with team leaders Chet Buell and Cyndy Van Der Wiele (riding tandem) and I set out at approximately 6:00 am from Joe's house on the north side of Raleigh.

Why would a guy drive all the way down from Rochester to ride a Flèche? Well...Pete Dusel's batchelor party included a flèche – I'd say, he likes it!

The predicted weather was perfect, in stark contrast to the cold persistent rain that marked last year's event - perhaps not surprisingly, Joe and Chet had to assemble the team from new crop of riders this year, as the rough conditions of 2003 must have left the previous riders less enthused. They missed out.

Though designed to keep the event fun, Flèche rules are complex, at least to the non-French mind, involving a required distance of 360km (224mi) to be completed, essentially, in a time period between 23 and 25 hours. (See http://www.rusa.org/flecherules.html for details) Yes, there is effectively a maximum speed - the goal is not to race, but to celebrate springtime, the joy of cycling, endurance cycling skills and the memory of “Velocio” in a distinct form of ride that brings cyclists from various outlying starting points to a central celebration on Saturday morning. (See http://cycling.ahands.org/bicycling/velocio.html for the story of Paul de Vivie and why we celebrate “Velocio, Grand Seigneur” with the Flèche). 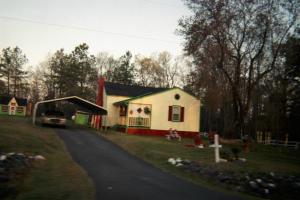 For North Carolina Randonneurs, that central point is the home of Richard Lawrence in Lexington North Carolina. Think of the largest challenges in cycling - Richard has done them - PBP, BMB, RAAM, Mt. Mitchell - he's done it all, yet he shares his experiences with such excited enthusiasm that he imbibes in listeners a confidence in their own capabilities and a zeal to push them limits of possibilities.

Just before dawn, the four of us struck out, accompanied by our host, Joe Grove (beginning his morning commute to work). Our final destination lay to the west, but first we headed north and turned east into the rising sun to criss-cross Fall's Lake at sunrise. Time Control Points were designated approximately every fifty miles, the first of which found us at a filing station where the clerk knew Chet and Cyndy from prior Flèches (or Road Dog rides?) and greeted us enthusiastically, sharing humorous anecdotes - e.g. when he worked the convenience store in Texas:

“One day, in strides a large man dressed in cowboy hat and boots.
'Where you from,' he asks?
'I am from Pakistan, Sir,' I replied.
He eyed me, scratching his jaw and inquired, 'You Indian?'
(We laughed.)
'No,' I explained, 'Where are you from?'
'Well, I'm from Texas!' he said proudly, to which I responded, 'You Mexican?'”

Another Flèche rule restricts the time we could spend at any given stop to two hours maximum - that would be an exceedingly long stop on most rides, but remember that this is a twenty-four hour event. In any case, with 50 miles behind us, and 175 miles to go, we all knew we'd do well to build up a time surplus in the early stages and spent only a few minutes at the control before setting off again through the beauty of the Carolina springtime countryside enjoying April's blooming Dogwoods and Red Buds. 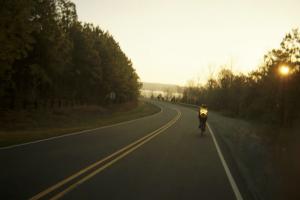 Pete commented that he was getting a preview of what the conditions would be back home in Rochester - in another two months! Incredibly, THIS is his first long ride of the season - we speculated as to whether or not on completion he could say that he'd done his first century of the year - or does a double not count?

Our second control placed us at lunch – Subway in Roxboro. Six-inch or foot-long? Well, if you don't eat it, you can stuff it in your jersey pocket to eat later, or to cushion your saddle when your bum gets sore! Speaking of “cushion” our time cushion continues to grow and we're pleased that we can take full two ours at control number three (dinner).

After lunch, we headed up toward the Virginia border passing close the Anderson Estate (future home of the Great North Carolina Cyclist Hostel) and Chet took us to visit "Jimmy" - proprietier of the friendliest convenience store / country deli in the world, period. Meeting Jimmy alone was worth the trip. 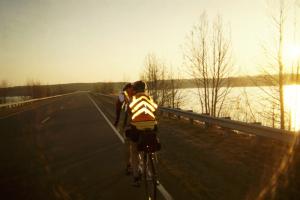 Jimmy's Gro. and Grill is located in metropolitan Providence near Yanceyville (Old 86 near Park Springs Road)-- if you were curious...-Cyndy

We hit the double-metric point (200km, or 124mi out) and express the radonneur's rejoice: “Only 100 miles to go, and it's not even dark yet!” With the pleasant rain-free weather comes pollen and unleashed dogs looking for something to chase! We give them a run for their money. Pete shows us the scars from a recent attack, but these mostly run, bark and obey our commands to stay out of the road – there sure are a LOT of them though!

At the third control, our team leaders (Chet and Cyndy) guide us to the Italian restaurant. Our route planner and ride organizer (Joe) had told me Friday night how he drove to this spot to bring the team dry garments and found they'd converted half of the restaurant to an impromptu clothes drying facility! After exchanging their soaked for drys, our hearty bunch had set out into the night only to be greeted with a cloudburst saturating the fresh apparel! 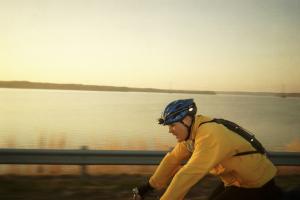 That was then – 2004 couldn't have been better. We were beginning to feel the effects of over exposure to the sun (except Pete, who had the good sense to wear sunblock), but weren't complaining! Chet was so relieved to be riding dry, he scarcely voiced concern when a large insect partook of a meal from the flesh of his right thigh.

First mechanical – diving toward a creek bottom in the dark, our tandem pilot didn't see the broken bottle in the road until it was too late to avoid it. Luckily, neither tire deflated, but there was damage. Still rolling on the rubber from last year's PBP, the rear was looking rather threadbare. We were doing well on time, the night was comfortable and there was no sense taking chances on a questionable tire, so off with the old and on with a new.

Control number four brought us to Carolina Diner for a midnight snack...Cyndy says "We shared the diner with other "graveyard" shift workers— the sheriff's deputies, etc." okay, early a.m. snack, and a LOT of coffee! We were doing well, with ample time cushion, but now we had to plan in order to make sure we conformed to the rules – the last 25km (15mi) of the ride must be covered between the 22nd and 24th hours (4:00 am and 6:00 am, in our case). We could probably take a full two hour stop, but one-and-one-half would be safer. Stay too long, and we'd have to race to make the finish on time. Stay too short, and we'd be stuck waiting by the roadside for 4:00am to roll around before beginning the final 15mi leg.

Joel says the rules don't require us to slow down– we could have simply added more miles... 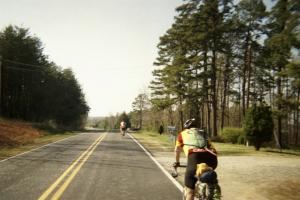 It was cool, but nice out – in fact it was a bit too cold for our liking in the diner, so we opted for a 90-minute rest and set out toward the 4:00 am checkpoint. As we approached that point, through the quiet and easy streets of High Point, we began looking for an open convenience store. We pulled in to the only 24 hour shop to find they had a brief 90-minute housekeeping lockdown that unfortunately coincided with our arrival!

Chet found some outdoor wooden benches setup to facilitate spectators at the Karate gym and we spent our required rest there, visited the warm convenience store when it opened before pushing on.

Even after 200+ miles, that final leg just seems to stretch out forever when you don't know the route. A jackrabbit darted across our path inches from my front front wheel. We turned on to U.S. Highway 29-70/I-85 Business for a quick descent on exceptionally smooth surface in the early morning darkness, turned left and climbed into Richard Lawrence's neighborhood, down the gravel road and to the garage! Yee haw! My knees and back-side might not have been willing, but I could definitely entertain the idea of biking back to Raleigh by a more direct route, but first: showers, greet the other teams, have breakfast and nap! (No, I didn't bike back - slept in the back of Chet's Volvo instead - doing my part to keep the driver awake, by snoring.) 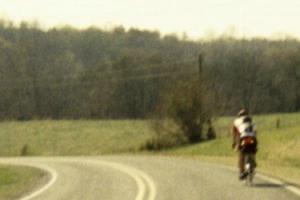 Two hundred plus miles, spread out over every hour of the day & night with no bad encounters with drivers. It is still possible in America, even in the south. Durring the night, at an intersection, one car load of youths began howling like werewolves. Later, on a small country road, another car pulled just past us, then into a driveway, back out and toward us again. Could be trouble...when he passed he called out the window "Yall be carefull."

The other teams had started later than we had on Friday, so they arrived correspondingly later on Saturday – this worked well to reduce contention for the shower and lighten the load on our hosts Richard and Sylvia. Sylvia was originally from Pennsylvania but moved to Switzerland years ago – to ski. There she became an avid cyclist. Visiting home, she became friends with Richard on RAAM. She volunteered to help with out Flèche, greeted, entertained and fed us at the finish.

Over breakfast, team “Flèche Wounds” entertained us with the story of their ride, beginning on the Blue Ridge Parkway in the shadows of Grandfather Mountain. They've always been enthusiastic about sprinting to the county lines, and developed a new game of mad sprints to the “No Fishing from Bridge” signs and any other minor landmarks! 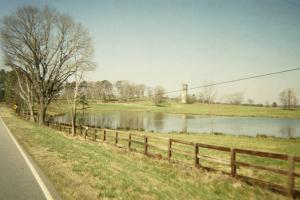 All in all, a great way to celebrate Easter, Spring, camaraderie and Cycling. Many thanks to our event organizers, Richard, Joe, Sylvia, our team leads, Chet and Cyndy in our case, who held us together and navigated, watching out for our safety and general enjoyment of the ride. Thanks also to the teams converging from the mountains of the northwest corner of the state and the Charlotte team riding up from the southwest.

Here's to fresh air, vigorous exercise and next year!